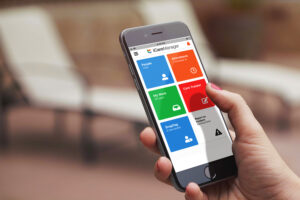 Maryland is working on transitioning the DDA community of providers from the old PCIS2 system to the new LTSS Maryland. While the target date for all providers to be fully up and running is to be determined, DDA has identified an Early Adopter Group of providers to move forward with LTSS. There are five providers in this group, 2 went live in July and 3 will go live in October. Word is there will be 4-5 more going live in January as part of the state’s efforts to move things along.

One of the providers in the Early Adopters Group is SEEC, a progressive nonprofit agency providing a wide range of community supports to help people with intellectual and developmental disabilities live lives of their choosing. We thought it would be fun to sit down with their Executive Director and leadership staff to learn more about what their experience has been in the EAG and share it with you all!

SEEC had several internal early adopter committees leading up to the go-live date, each one of them had their own process they had to go through including piloting, training, scaleup plans. SEEC designated captains on staff to select an eHR vendor with input from stakeholders. They walked through a few systems and chose to go with iCareManager. The onboarding timeframe was quick, leading up to the LTSS go-live date. “I had a fear that the thing that would fail would be the upload,” says Karen Lee, Executive Director of SEEC, “and it was absolutely seamless!”

SEEC piloted the upload with 1 person first, and now 4 people. “The shock of how absolutely smooth it was – we clicked upload to LTSS and there it was, done! It wasn’t just flawless, it was efficient,” says Karen.

“The amount of time that it would take to enter attendance into LTSS would be prohibitive. You would have to hire a full-time staff. The efficiencies that are gained through an upload are immeasurable,” says Karen.

When asked about how it’s been to partner with DDA through the EAG process, Karen had this to say:

“DDA really trusted that SEEC was an organization that had the infrastructure to be able to pull this off and that we were very open,” says Karen Lee. “The regional office was very responsive and worked very closely with the CCS agencies to make sure plans were done on time. DDA has been a very good partner,” says Karen.

“The biggest problem is going to be making sure the PCP in LTSS is accurate,” says Karen. One thing that is interesting that SEEC has learned that they thought was valuable for people to understand, is that in LTSS the CCS, provider, and DDA all see different things.

The next step for SEEC will be to upload more entries and scale up the uploads. They will do so with iCareManager as a continued partner.

“It has been a great partnership from the get go,” says Djibril Kamara, Director of Information Technology at SEEC. “The feedback that we got was very positive and as we continued to work together, we felt like our plan to go-live so quickly so we could meet the LTSS deadline was doable.”

iCareManager is thrilled to have been a part of SEEC’s journey and look forward to partnering with more agencies as DDA moves forward with the LTSS rollout.

Person-Centered Planning: Your One Stop Shop
Top 10 Medical Errors in Home Support Models and How eMAR Prevents Them
State Audits are a Breeze with iCareManager